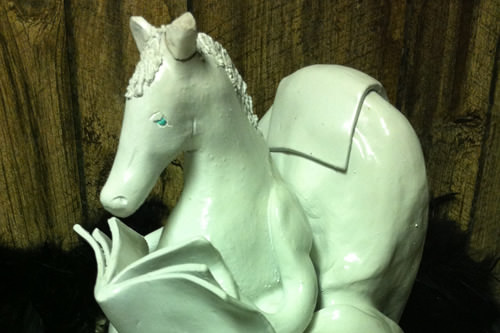 Horses have played such a huge part of our heritage as a nation that it’s no small wonder that the horse is frequently used in many phrases in our language. Of course, some of those phrases are more well-know and used more often – while others aren’t heard as much anymore. Still – we thought it would be great to do a little series on horse idioms! This week we will cover 5 horse phrases.

A Horse of Another Color

A situation or a subject that is different from what you had first thought it was.

Example: You said you didn’t like going to the movies, but if you don’t want to go because you’re broke, that’s a horse of another color.

A competition which one particular person or team is very likely to win because they seem much better than the other people competing.

Example: This racing competition has been a one-horse race right from the start.

Someone or something that attacks the group or organization it belongs to. In Greek stories, the Trojan horse was a large wooden horse that the Greeks used to take soldiers secretly into the city of Troy in order to destroy it.

Example: Traditional supporters have accused the new leadership of being a Trojan horse trying to destroy the organization from within.

To waste time doing something that has already been attempted.

Example: Do you think it’s worth sending my manuscript to other publishers or I am just beating a dead horse?

A painful, persistent cramp in the arm or leg, usually from strain.

Example: Don’t hike too far or you’ll get a charley horse.

More to come! Let us know in the comments if you have one you’d like for us to add to our future posts!